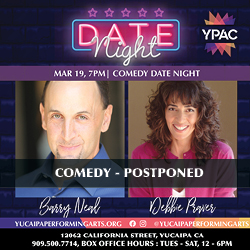 The Yucaipa Performing Arts Center (YPAC) is proud to present Barry Neal and Debbie Praver, two new Hollywood-based comedians in our Date Night Comedy Series. Neal and Praver will perform their act, “Love and Laughter,” with Ace Guillen hosting on March 19 at 7PM. Free child care is provided for one child perticket purchased (ages 4 – 13). Adult beverages and snacks are available for purchase during this event.

Barry Neal’s clean, high-energy style has quickly moved him up the comedy ladder as a notable headliner. He’s made appearances on MTV, NBC, Comedy Central, and VH-1. His “Counselor of Love” act is currently being shopped as a sitcom, which Barry wrote along with Dan Patterson, the creator and executive producer of Who’s Line Is It Anyway?

Ace Guillen, the host for this event, started his career as a rocker, touring with rock bands and being named a finalist for the Inland Empire Music Awards, before bringing his musical talent to comedy.  With rave reviews in major newspapers and magazines, it’s no wonder Ace performs regularly in clubs like the Improv, the Laugh Factory, the Comedy Store and countless other venues across the country. Ace has starred in theater productions and Independent films, and has also made appearances on Playboy TV, National Lampoon Radio on XM Satellite radio, NBC, Comedy Central, and was a cast member of “Man Up  Stand Up”, “Latino 101”, “Stand-Up and Deliver”, the sketch Comedy show “Unacceptable Behavior” on the NuVo TV Networkand most recently LAUGHS on FOX!