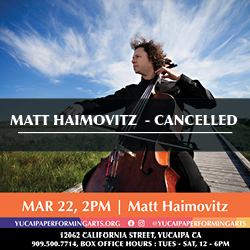 The Yucaipa Performing Arts Center is privileged to present renowned cellist and musical pioneer, Matt Haimovitz March 22. Praised by The New York Times as a “ferociously talented cellist who brings his megawatt sound and uncommon expressive gifts to a vast variety of styles” and by The New Yorker as a “remarkable virtuoso” who “never turns in a predictable performance,” Haimovitz will undoubtedly bring an astounding musical experience to Yucaipa. In his Bach Listening-Room Presentation, Haimovitz will take the audience on a journey of Johann Sebastian Bach’s solo cello suites. In his personal interpretation, Haimovitz has commissioned new overtures to each of the suites from composers influenced by folk music from around the globe, including Philip Glass, Vijay Iyer, David Sanford, Du Yun, Roberto Sierra and Luna Pearl Woolf. This work was received with great acclaim, culminating in a historic performance at New York’s infamous punk palace, CBGB, and was filmed by ABC News for Nightline UpClose.

Haimovitz has played on the world’s most esteemed stages, with such orchestras and conductors as the Berlin Philharmonic, the New York Philharmonic with Zubin Mehta, and the English Chamber Orchestra with Daniel Barenboim. Please arrive early for our pre-discussion with Crafton Hills College’s music professor, Mark McConnell, and stay afterward for an exclusive Q and A session with Matt Haimovitz!