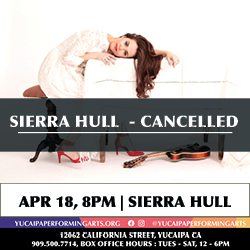 The YPAC is proud to host award-winning mandolinist, composer, and lyricist, Sierra Hull. Sierra Hull debuted at the Grand Ole Opry at age 10. At age 13, she signed with Rounder Records, issued her debut album, Secrets, and garnered the first of a near decade of nominations for Mandolin Player of the Year. Hull played at the Kennedy Center at age 16 and performed at the White House at age 20.

By 2016, she tapped legendary Bluegrass musician Bela Fleck to produce her third album, Weighted Mind, which was nominated for a Grammy. Months later, she became the first woman to win the title of Mandolin Player of the Year — which she has won two additional times — from the International Bluegrass Music Association.

Hull continues to guest with friends and legends, and has joined such icons as the Indigo Girls, Garth Brooks, and Gillian Welch; she has performed at the Country Music Awards with Brad Paisley, Marty Stuart, and Ricky Skaggs, who helped inspire her first album.

She will be performing songs from her latest album, 25 Trips. Once a child prodigy, Hull still applies her parents’ mantra: “Hard work, more than anything, will get you somewhere.”

Adult beverages and snacks are available for purchase.